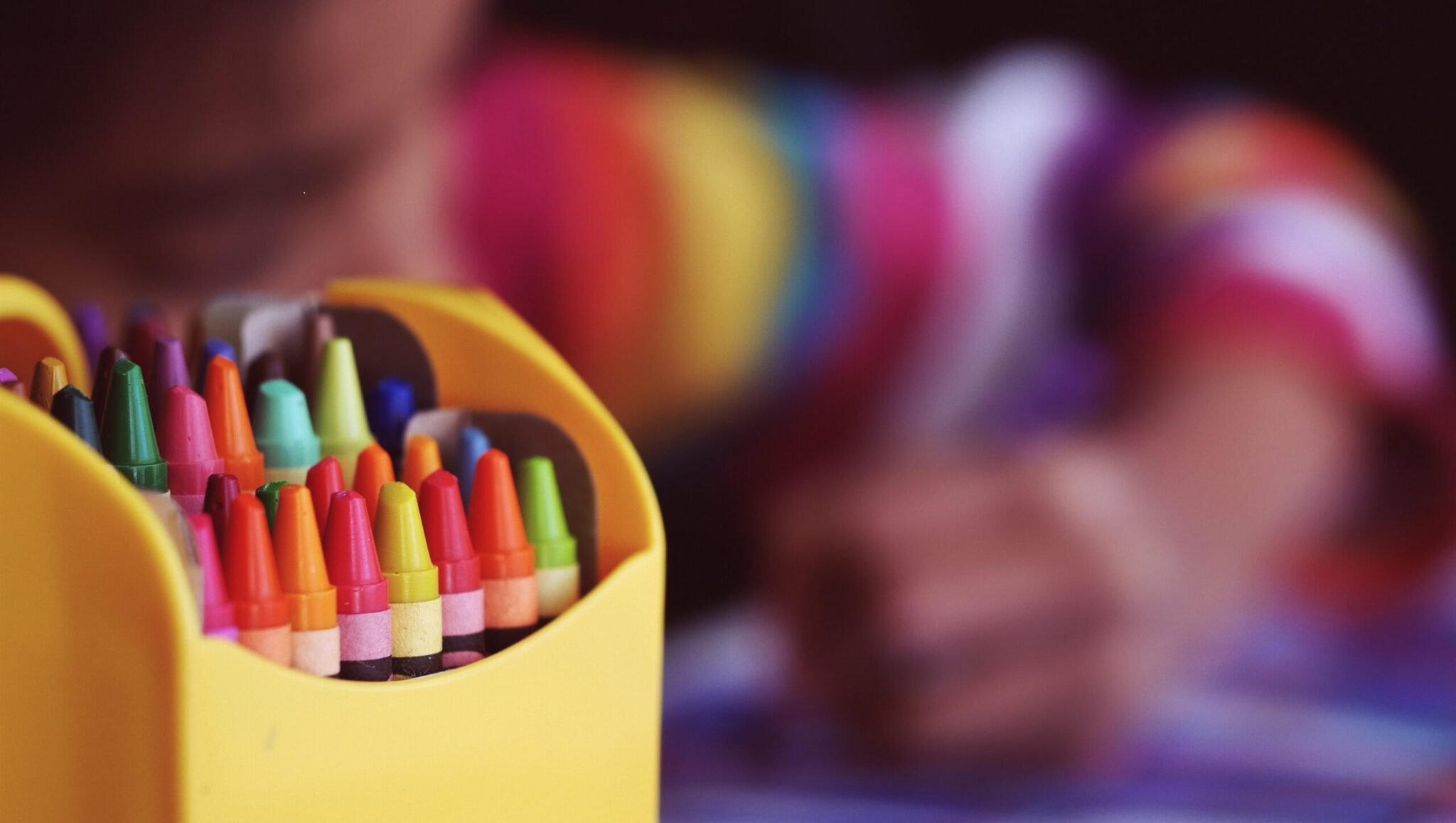 When my son was in the fourth grade in public school, they were learning about American geography. For their final assignment of the module, the teacher wanted the kids to color a pre-printed map of the United States.

To tell this story properly I need you to know that until that year, all my kids were homeschooled. When teaching our kids we always encouraged curiosity, questions and experimentation, within the bounds of good morals, concern for others and respect for adults.

Anyway, my son told me about this coloring assignment. My first thought was, “Who gives fourth graders a coloring assignment on par with what you would give preschoolers?” Worse were the rules for the coloring. Only use two colors. Alternate colors like a checkerboard on the map. Stay within the lines on the page. No crazy colors, stripes, dots, textures, shading, words, drawings or any other kind of creativity. Failure to abide by these rules would result in a failing grade – an “F” – on the assignment.

This threat mattered to my son, who was justifiably proud of his good grades.

Driving him home from school that day, he asked me why he couldn’t use more colors. Why would she tell him to color within the lines? Did she think he was a preschooler? He didn’t understand it. He just wanted to do something more creative. Not unacceptable in any way, just creative enough to make a boring assignment more interesting.

This conversation took me back to a similar situation when I was in the third grade.

My classmates and I were in the library getting an orientation from the librarian. That would be Media Coordinator to the young whipper-snappers in the audience. She told us about the different classifications of books (Yes, books! With paper pages and everything!) and where to find them along with a very short list of “do’s” and a very long list of “dont’s”.

As she waited for our teacher to come retrieve us, we were asked to color a pre-printed outline illustration of a row of books on a bookshelf. The books had various shapes and sizes but the spines were all blank. We were told to only use one color per book, write a real book name vertically on each, and not to even consider doing anything other than instructed or we would fail our entire library orientation. Not just the coloring part. The whole orientation, which was a prerequisite to permission to use the library.

I couldn’t do it

Like my son, I cared about my grades. I particularly cared about the library. This day was a rite of passage of sorts. After the library orientation, you were awarded the esteemed privilege of Checking Out Books.

You see, I loved to read. I had already read and re-read everything I had at home and everything I could sneak out of my older brother and sister’s bedrooms when they weren’t around. I had been anticipating this magical day in the library knowing it would open up a huge supply of reading material that I didn’t have access to any other way.

If I failed the orientation, I couldn’t use the library.

I still couldn’t do it

Much to the shock of my peers and under a hushed chorus of exclamations about how I would fail and how I would never get to use the library, I drew and colored and shaded and wrote titles and authors names all different ways and even added appropriate Dewey Decimal System numbers according to their classifications.

My intent wasn’t to be rebellious. I wasn’t intentionally being disrespectful. What I did was simply a natural expression of who I was. Am. No, I wasn’t following the directions, but in my eight year old mind I was going beyond what I was asked to do. I was doing it better. In my naivete, I expected to be praised for my additional effort.

I barely finished in time, handing it in just before our teacher returned. As I walked away, the librarian called me back. She obviously wasn’t happy and asked me why I hadn’t followed her very simple instructions. I emotionally closed down, withering under the stern gaze of this person whom I had hoped would open the doors to endless reading material to me.

Since I didn’t answer, I was sent back to my seat. I watched my teacher and the librarian, my page in hand, talking in hushed tones while alternating glances at me. As my teacher broke away to gather her students for the return trip to their regular classroom, the librarian called me back again and angrily told me that I was not only not going to be allowed to check out books, I wasn’t going to be allowed to even enter the library.

I wanted to run away and never go back to school ever again.

The next day our papers were returned. Mine was adorned with a big red “F” with a circle wrapped around it with an emotional flourish. Next week when our class went to the library, I was allowed in, but as my classmates were perusing bookshelves and checking out books for the first time, I had to sit silently in a chair by the door.

A few days later, my teacher approached me and offered an opportunity to do the coloring assignment over, as instructed, so I could pass the orientation and use the library.

The chance for redemption was in my hands. I didn’t take it.

I don’t remember exactly how it came about but I did eventually get to use the library, albeit always under the unwavering watchful scowl of its caretaker. The next year we had a new librarian and all of that mess was in the past. I wasn’t as if I were emotionally scarred. As I grew up the nightmares of being chased down endless gray corridors by angry crayons and books faded, I eventually quit looking over my shoulder while browsing bookshelves, and by the time I was out of school entirely I had forgotten the episode, never to think about it again, even now.

My son jabbed me in the arm with his pencil in the hope of stirring me from my reverie in an effort to avoid dying in a car wreck. Jerking us back onto the roadway, I settled down into my designated lane of travel, resumed breathing and tried to remember what my son had asked me. Oh yes. Coloring inside the lines. Having just saved both our lives, I felt he deserved a well thought out, adult answer.

Mentally putting other more plausible and potentially more infuriating possibilities aside, I told him his teacher was probably testing to see how well he followed instructions. I also told him that if he didn’t follow instructions, he would almost certainly receive the failing grade as promised.

He had a confused and disappointed look on his face, but I wasn’t done yet. I told him that if he really wanted to do the assignment according to his own creativity, he had my permission, but must be willing to face the fact that he would get that dreaded F. He turned his head to look out the window and didn’t say anything else.

The next day he handed his teacher a United States map carefully colored in just about every way the teacher had told him not to. She was good to her word and gave him an F. I was so proud.

We need to be constrained by laws, morals and ethics because if we don’t, our sinful natures will drag us down into chaos and worse. Have you seen The Purge? Like that.

There are also times when we need to stay in our lane, figuratively and literally. Like playing to our skills and not wasting time on things we are not suited for. And staying on the road while driving your child home from school.

There are other things that purposefully constrain us, like calendars, to-do lists, CRMs and the withering look from your wife when you’ve neglected your household chores for too long. We all need tools to keep us focused and on track.

None of that should keep me, you or anyone from grabbing all the crayons we can and coloring outside the lines, especially when it comes to our auditions and performances. Experiment. Blow the walls off your comfort zone. Ad lib. Play. Sound stupid, outrageous, and even ugly. Be that version of you that the rest of the world never gets to see. Fiercely obliterate those lines like they were never there.

If you are in your booth and record it, listen to the playback. I guarantee there will be something new that you can integrate into your work.

Stretching is growing. A tree will flourish in a pot for a while, but will eventually become stunted and die as it becomes rootbound.

All of this remembrance is fuel for my internal fire and I hope an inspiration to you. I’m a pretty calm, conservative guy in a lot of ways. In my voice-over work, I need an occasional kick in the nether-regions to remind me to take the risk of doing something different, sounding different and potentially suffer the consequences of being perceived as different. Without regularly stretching in this way, I know I can never reap the potential benefits of being different.

As much as I might like to blame people like that librarian for putting constraints on me, as I am writing this I know that many of the “lines” that box me in are self inflicted. I have drawn outlines in my life around what is safe, acceptable and expected. The “right” way to do something. The “best” method. The “standard” process. The way something “should” be done.

Tie down anything not attached to the floor because, for today at least, I am that eight year old boy again, coloring outside the lines. I am going to go beyond my comfort zone. Outside of safe. When I step into my booth today I am going to be that character, use that accent, go to emotional extremes and let fly with anything and everything that comes out without worrying about what any other voice tells me I should do. Even if I can’t go to the library afterward.

I pity the people who get my auditions today.

Go forth and color outside the lines. You have my permission.