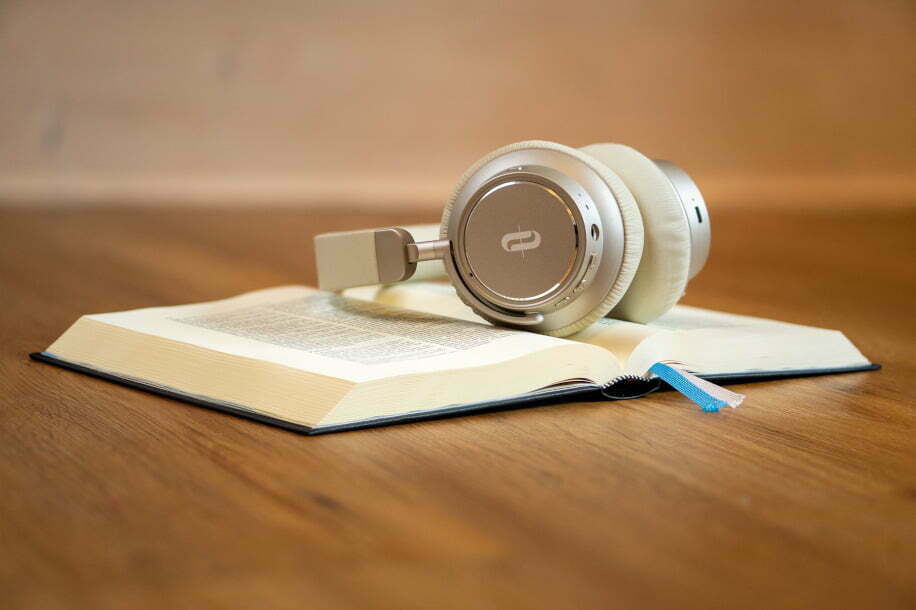 Photo used with permission from Pixabay

In my blog post from last year entitled It’s Not All About Pumpkin Pie, I mentioned that Thanksgiving is one of my favorite holidays. If you will indulge me, I want to share with you one of the little things I have been thankful for in the past year. I find that as I look for the little things to be thankful for, it makes it easier to recognize the big ones. I hope that it might help you too.

I have always been an old-fashioned, hold-a-physical-book-in-your-hand, turn-pages-with-my-fingers kind of reader. I like looking at the spines of my books on their bookshelves and cherish the smell of the paper when I crack them open. Yes, books used to be made of paper.

Voiceover has somewhat changed this for me. Firstly, because I now have very little time to sit and read. Secondly, because listening to others narrate stories is a great way to learn how to narrate stories. Who knew? The unexpected result is that I have fallen in love with audiobooks. The subscription to Audible that I swore would only be for one experimental month… has now stretched into two years.

In no particular order, here is a list of a few audiobooks I have especially enjoyed in the past year or so. If you are new to audiobooks, depending on your tastes, one of these might be a good place to start.

Hannah’s Dream by Diane Hammond
This is a book about an old elephant, her old caretaker and the old zoo where they live. Sounds a little odd, doesn’t it? It is also about love, sacrifice and daring to do what is right in the face of opposition. The characters are endearing, and the way they are portrayed by narrator Laura Flanagan is charming and relatable. This was a book I more or less chose at random, but it more than rewarded me for my time.

The Detective Gretel Series by P. J. Brackston
Four tongue-firmly-in-cheek stories that are quirky, fun and set in grown-up Brother’s Grimm world. Our protagonist is Gretel (yes, that Gretel) who is now 35 and working as a private investigator. She has a great love of food, the body to go with it, an expensive taste in clothes and a sharp mind. Her brother Hansel lives with her and has grown even larger, living off of his sister and avoiding work whenever possible. The books are: Once Upon A Crime, Gretel and The Case of the Missing Frog Prints, The Sorcerer’s Appendix and The Case of the Fickle Mermaid. I found Gretel’s adventures to be light and fun, something welcome under our current COVID cloud. Once I started the first one, I listened through to the last of book four. Narrated with great zest by Kate Reading.

This is another series that surprised me because it initially looked to be a bit too YA for my liking, but the author’s unique writing style and sense of humor won me over by the end of the first few minutes. The writing is witty and extravagant, but it was narrator Bahni Turpin who won my heart. Her voices and characterizations were full of heart and lifted the text to it’s full comedic potential. Her performance is as delightful as the story itself.

The Sea in the Sky by Jackson Musker
A science fiction story fleshed out as a full-cast Audible Original. Full-cast in this case is mostly two people, Bee Guerrero, richly portrayed by Octavia Chavez-Richmond and Ty Winfield, portrayed by James Ludwig. These characters take incredible risks for the love of discovery, forcing them into difficult situations which require facing difficult truths about themselves. I felt like a passenger along with them on their diving expedition into the waters of Saturn’s moon Enceladus, which serves as a nice allegory for the dive the characters take into their own motivations, limitations and the space where perception and reality blur. Produced with an original soundtrack and elaborate sound design.

Voice Over Man, the Extraordinary Story of a Professional Voice Actor, by Peter Dickson
I have previously written in more detail about this book, so won’t do that here. Peter Dickson has had, and is having, a long, rich career in voice-over. He is also a founder of the Gravy For The Brain online voice-over training company, along with Hugh Edwards. I recommend the audiobook over the written version because Dickson’s own charm and evident emotion bring his stories to life. I really enjoyed it, as you will read in my previous post, Peter Dickson Won’t Be Happy.

Voice Lessons: How a Couple of Ninja Turtles, Pinky, and an Animaniac Saved My Life, by Rob Paulsen. How good is this book? When I listened to it, I am embarrassed to say, I knew Rob’s name and not much else about him. I had seen Ninja Turtles a few times but was unaware of his connection to it. I have seen none of the other shows he is famous for doing voices for. Despite this, I was moved, and challenged by his story. It made me wish I knew him, or at least could sit down with him for a few hours and talk.

Here are a few more worth a listen:

Deacon King Kong by James McBride. Humanly, humorously narrated by Dominic Hoffman. I expound on this a little in my previous blog post, “Two Audiobook Reviews and Cultural Bridge Building”. This story and performance was a delight!

Voice-Over Voice Actor: The Extended Edition by Yuri Lowenthal and Tara Platt. This is another book where the audio version rises above the printed one.

I know, these are just audiobooks. Why would I waste my precious blog space telling you about audiobooks? Looking in our lives for little things to be thankful for makes it easier to recognize the big ones. A thankful heart will make your burdens lighter. It will make getting through the tough times easier. It will also add joy to your life. If this isn’t a part of your everyday life, try starting to make a new habit with looking for little things to be thankful for. Like audiobooks.